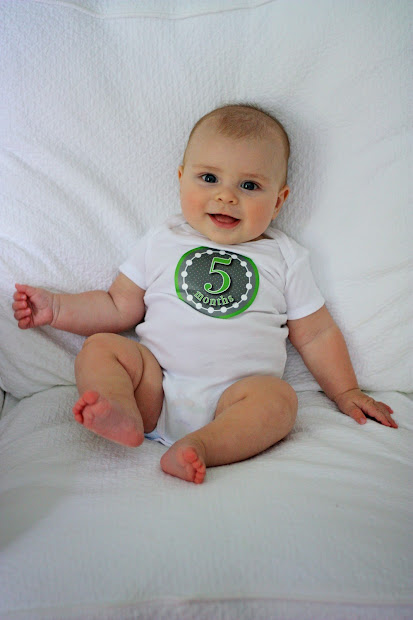 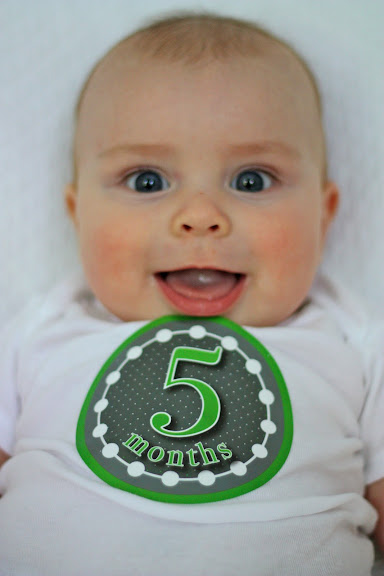 Sleep:  Bedtime is between 6-7PM and usually wakes up between 5:30 and 6:30AM!  This month we have gotten our money's worth out of the monitor as James Robert surprised us nightly by worming and squirming all over the crib.  He started waking up in the middle of the night as he would be worked into a corner and unable to get his way out. We were scared that he was going to hurt his arms or legs as they poked through the crib slates, so we installed the breathable bumpers which seemed to help a lot. 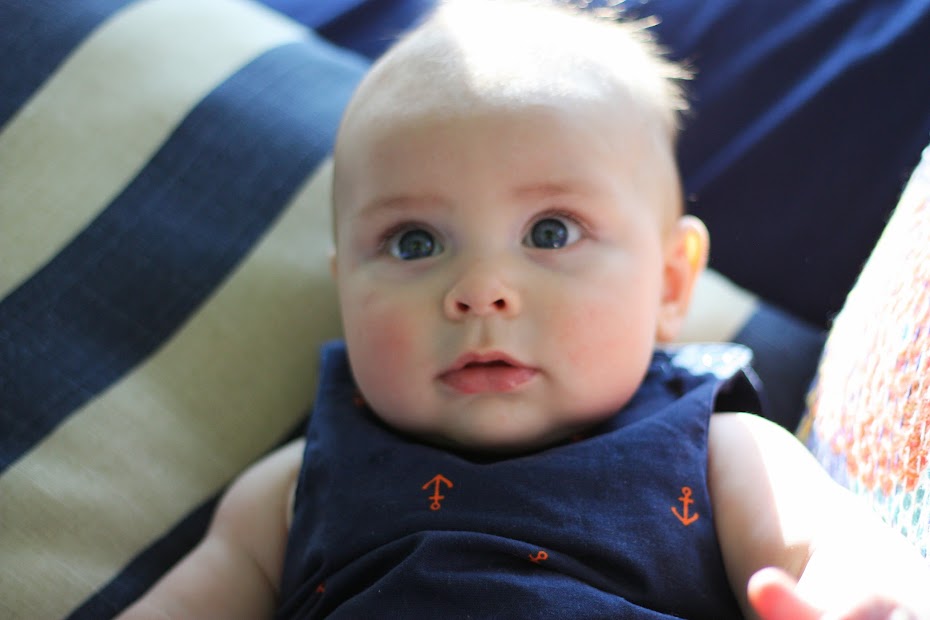 Social: Loves his nanny, Erin, and having play dates with friends.

Diet: Per the doctor's recommendation, we introduced oat cereal to James Robert's diet this month. He is curious when we eat or drink and lunges at our forks and cups. I think we have a bourgeoning foodie. 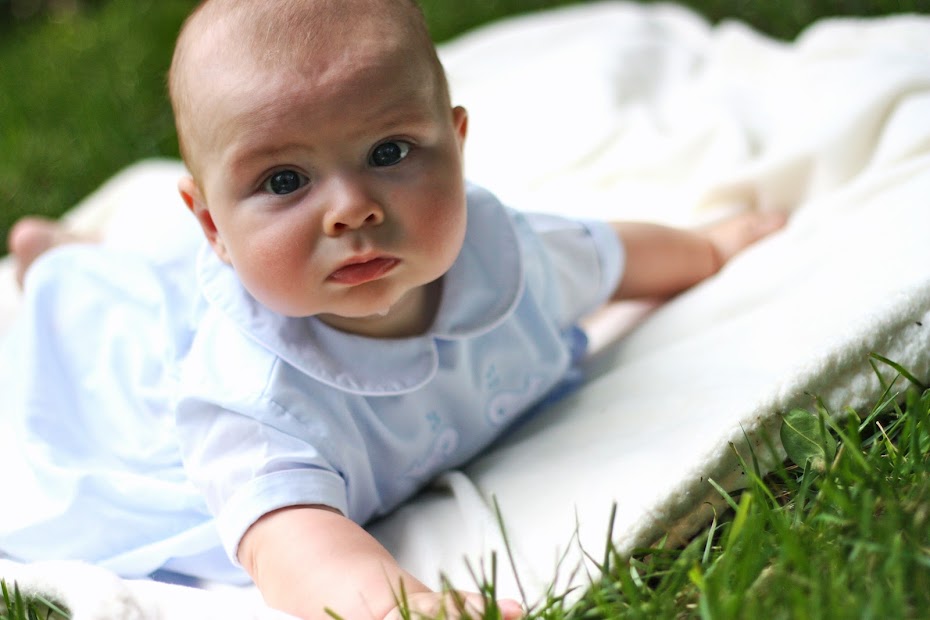 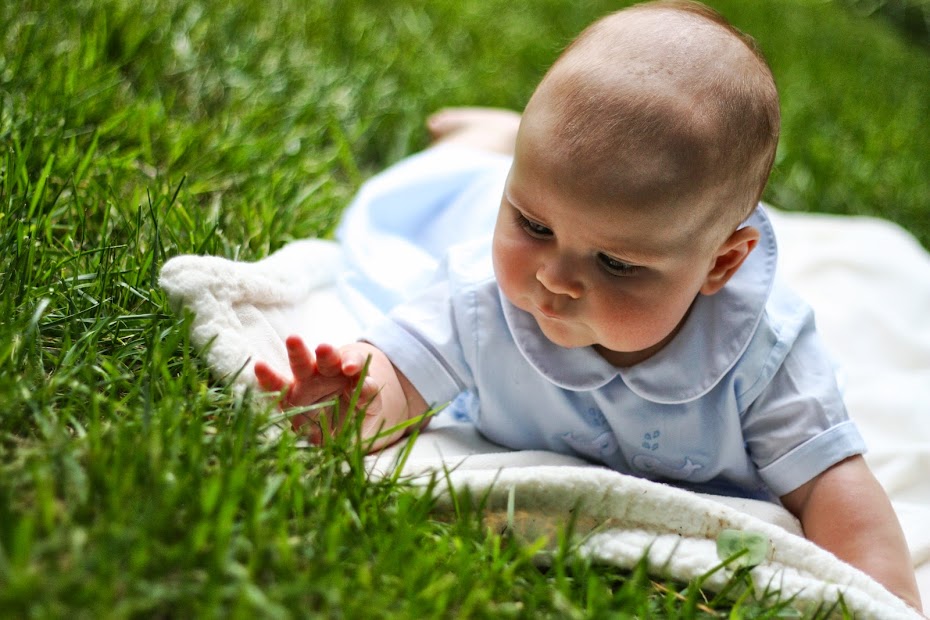 Clothes: A few tears were shed as we stored all of James Robert's 3 month clothes and have transitioned to mostly 6mo, 9mo or some even 12mo items that are smocked.  We had to buy all new PJ's this month, including his favorite new Hanna's. 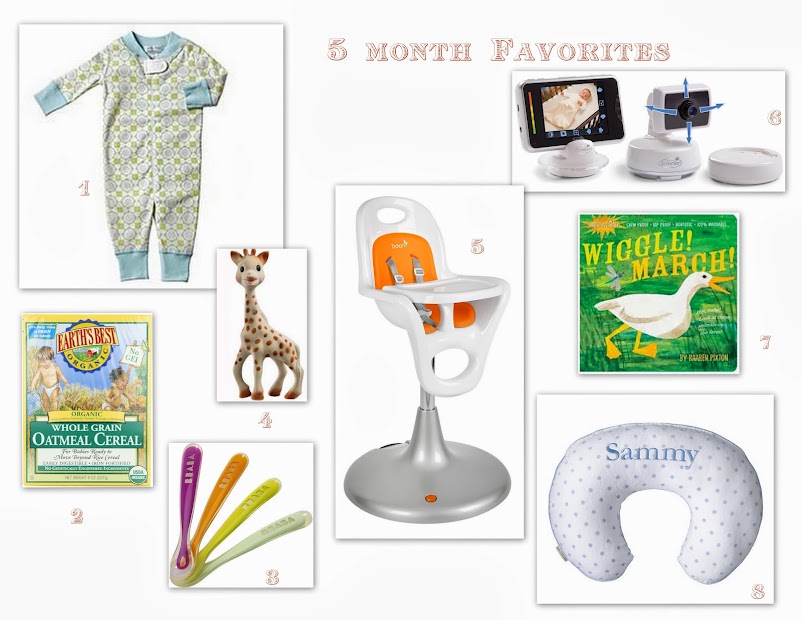 1) Hanna's PJ's- the softest and cutest. period.
2) Earth's Best Oatmeal Cereal
3) Beaba Spoons- I'm a sucker for anything baby and French; these spoons do live up to the hype
4) Sophie- ditto on the above.  This French import is "the" chew toy that JR just can't get enough of
5) Boon Flair Highchair-  after polling my mom friends and perusing the blogs, we ended up with the boon highchair as I was sold on its ease of cleaning and ability to easily go up and down so that we can feed James Robert at the table or the island.  So far, love it!
6) Summer Infant Monitor- worth every penny.
7) Wiggle! March! - love these books as they are washable, drool proof and indestructible in little hands. Plus, the illustrations are beautiful.
8) Boppy- Now that JR is working on sitting up unaided, the Boppy works double duty. We've gotten a ton of miles out of the pottery barn cover as it is so soft. 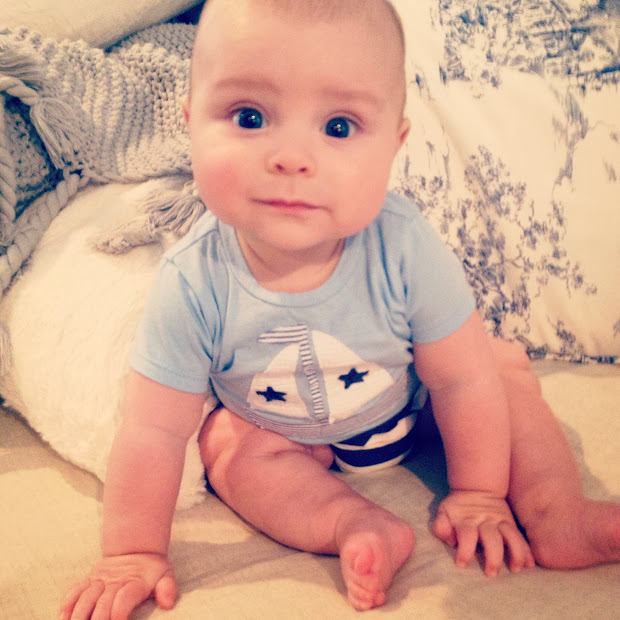 Crying:  Less and less crying at bedtime as James Robert has transitioned to taking a nap and sleeping in his pack and play or crib. We swear by sleep sheet and the halo sleep sacks. The most you'll hear James Robert cry is around mealtime when he is hungry and ready to eat!

Likes:  This has been such a wonderful and exciting month as James Robert proves eager and interested in exploring everything in the world around him. From touching all of the plants in the house, to taking walks and going wide-eyed at the bird noises to playing the piano, it is a marvel to see him experience new things daily.  I like to think that he also loves our Mommy and me walks as he falls asleep smiling in the baby Ergo.  We fondly refer to him as our little koala. 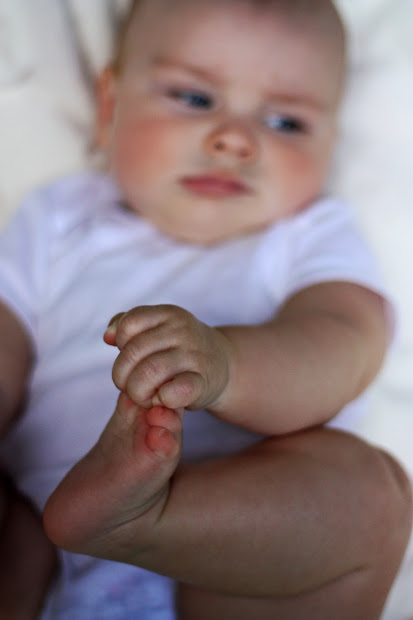 Milestones:  There seem to be too many to count, but some memorable ones are eating solids, holding his bottle all on his own while eating, working on sitting up and eating his toes.